Welcome to the Gift of Tongues Project.

The Purpose of the Gift of Tongues Project:

How much do you know about speaking in tongues? Take this quiz and find out. Introductory Notes to the Gift of Tongues Project

The nature and purpose behind the Gift of Tongues Project and its methodology. 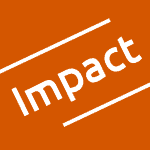 The Worldwide impact of the Pentecostal movement and speaking in tongues

This article shows how Renewalism (Pentecostals, Charismatics, and Third-Wavers) is the fastest growing movement in Christianity. This widespread influence requires more careful attention to their tongues doctrine. 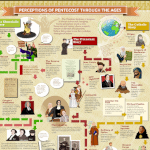 Perceptions of Pentecost Through the Ages

A graphic demonstrating the overall narrative of the doctrine from a variety of perspectives. Starting from Delphi around 300 BC to modern times. 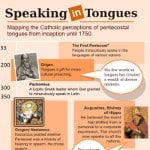 Early, Medieval and pre-Reformation Christianity is full of references to tongues speaking or doctrinal addresses about Pentecost. See the infographic for more information. A History of Unknown Tongues in the English Bible.

The term unknown tongues is an English Bible tradition that traces back to the Reformation. See the infographic on how this transpired. 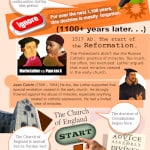 Theologians and thinkers throughout history have vacillated on the idea that miracles, including tongues, have ceased. This infographic follows the theory throughout its courses. 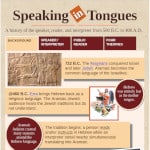 The Tongues of Corinth infographic

The emphasis here is the connection of speaking in tongues with the ancient Jewish liturgy and the later evolution of this function in the Church. A web-interactive page. However, it takes a long time to load. Best viewed on a desktop computer. 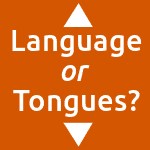 Language or Tongues? The semantic battleground 7 Facts about Speaking in Tongues

The results so far. A short, snappy, 7 pointer. 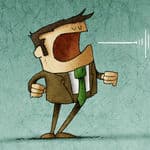 The Renewalist Response to the Gift of Tongues Project

The various responses and lack thereof by the Pentecostal, Charismatic, and Third Wave Communities to the Gift of Tongues Project.

The Christian doctrine of tongues from 100 to 300 AD

As you will see, there are only a few but important references during this time. This lack of literature during this period is a problem in every realm of Christian studies. The literature available on the subject greatly increases shortly after.

The Christian doctrine of tongues from 301 to 476 AD

These centuries bring a wealth of information and commentary about the doctrine of tongues. Almost everyone who comes to this page is amazed at the amount available. This section stops at the iconic year when the Roman empire falls.

The authors during this period wrote some carefully thought-out pieces on the doctrine of tongues.

The Catholic Church really had a thing for speaking in tongues during the late Medieval Age. The following examples show the popularity of this doctrine. Some accounts refer to persons all the way back to the New Testament. I think these early references are doubtful but accurately describe Late Medieval perceptions.

A history of tongues in the Protestant Movement

How the Protestant Movement started redefining speaking in tongues and pushed it into a new direction.

Tongues as glossolalia is by far the most popular definition of speaking in tongues today. However, it is a recent addition to the Christian doctrine of tongues. It is only 200 years old. This section deals entirely with the birth and rise of the Doctrine of Glossolalia and its effect on modern interpretation.

The Doctrine of Cessationism – a doctrine that reappears throughout Christian history

Cessationism: the idea that the supernatural age of miracles died out after the establishment of the church. It is an old doctrine but reappears with a more rigorous and structured framework within the early Protestant movement.

Note: other early Church writers push for partial cessationism where miracles such as tongues ceased while others perpetuated. This doctrine is an important part of Christian history that no one should easily dismiss. Cessationism is entirely rejected by Pentecostals and Charismatics. Catholics largely ignore the modern version because it is a debate largely confined to the Protestant communities.

The Gift of Tongues Project ends determining how the Christian doctrine of tongues shifted from the supernatural ability to speak or hear a foreign language to glossolalia, ecstasy, or a private prayer language. The goal is not to detail every Pentecostal or Charismatic movement, only why the change occurred. There may occur many more meanings or slight modifications in either the Pentecostal or Charismatic movements since the 1930s. The GOT Project is unconcerned about these as the goals of the project are met.

Defining and understanding the tongues of Corinth through ancient literature.

Tongues as a Prayer Language Series

OK, Paul does mention praying in tongues too. Pentecostal readers want more evidence on this subject, so this series is dedicated to answering this question.This series is currently in active development.

Miscellaneous notes on the GOT Project. Important websites and videos by people active inside either the Pentecostal or Charismatic movements. High content publications relating to speaking in tongues.