The myth or reality of Hildegard of Bingen speaking in tongues.

Hildegard of Bingen was a remarkable twelfth-century German abbess–a rock star in her time. She even invented a primitive language for her convent. Was it glossolalia, speaking in tongues, singing in tongues, or jubilation?

She is a figure whom some academic Pentecostal whisper support. They allude that Hildegard was part of a tradition passed to them. 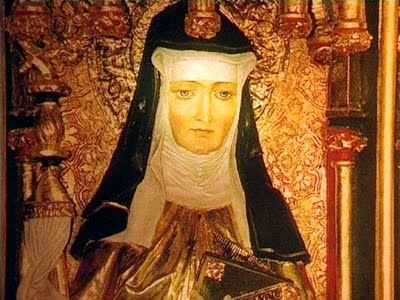 An examination reveals that her speaking or singing in tongues or similar rites is a myth. It has nothing to do with ecstasy and everything about her intellectual creativity. She did invent a primitive language, but it was not glossolalia.

Of course, readers of the Gift of Tongues Project won’t accept such a brief explanation. A more detailed description follows.

Hildegard of Bingen (also known as Hildegarde von Bingen, l. 1098-1179 CE) was a Christian mystic, Benedictine abbess, and polymath proficient in philosophy, musical composition, herbology, medieval literature, cosmology, medicine, biology, theology, and natural history. She refused to be defined by the patriarchal hierarchy of the church and, although she abided by its strictures, pushed the established boundaries for women almost past their limits.1

Barbara Newman, one of the most definitive scholars about Hildegard of Bingen, adds more superlatives.

Hildegard of Bingen (1098–1179), mistress of St. Rupert’s Monastery and “Sibyl of the Rhine,” would have been extraordinary in any age. But for a woman of the twelfth century, hedged by constraints of a misogynist world, her achievements baffle thought, marking her as a fixture so exceptional that posterity has found it hard to take her measure.2

Although not noted in the biography above, one of her intellectual and creative expressions was creating a new language.

Bingen left behind a writing popularly called the Lingua ignota which is normally translated as the unknown language. The text contains a newly created alphabet along with a brief dictionary. On one side is Hildegard’s invented word and the other with Latin and, less frequently, German equivalents.

There are two significant manuscripts that contain her coverage of Lingua ignota. One of the prime sources that make a connection from a Pentecostal experiential standpoint is Morton Kelsey. Kelsey, an Episcopalian (Anglican) priest, a teacher, and author, liked to integrate Jungian psychology with the supernatural Christian experience. His coverage of the doctrine of tongues, especially in his book; Tongue Speaking: The History and Meaning of Charismatic Experience (1964) mentions Hildegard and infers glossolalia. He is likely one of the key historical artifacts in making this connection. He knew that Hildegard wrote and spoke in an unknown language. From this, he made a hasty connection of Hildegard’s unknown with the unknown tongues of the English Bible tradition.

The first report in the Catholic church after that of Pachomius in the fourth century is found in the life of St. Hildegard, who lived through most of the twelfth century. She was a German abbess, brought up in the cloister but uneducated because she was sickly. Yet she was able not only to interpret an entirely unknown language. This was recorded, with an unknown alphabet of twenty-three letters, in a manuscript known as the Lingua ignota, which was later printed.5

Kelsey made an error in his research. He failed to qualify what the Benedictine abbess meant by her practice.

Other publications tended to make this association between Hildegard and glossolalia, such as E. Glenn Hinson in the book, Glossolalia: Tongue speaking in Biblical, historical, and psychological perspective.6 Robert Gromacki, author of the Modern Tongues Movement, makes little mention of the history of the doctrine of tongues within later Catholicism except for Hildegard and Vincent Ferrer. An erroneous history but an influential one.7 Patricia A. Ruse, in her Doctor of Ministry dissertation on the Experience of Glossolalia, notes Hildegard, among other historical leading Christian women practicing a ritual called Jubilation.8

During this period, mystical songs of unknown words would go on for hours, or one could be heard singing the Psalms and Gospels for days on end. This type of singing was called Jubilation.9

The author failed to verify the ritual that Hildegard practiced regarding an unknown language. It is left ambiguous.

There are Pentecostal-based blogs that correlate Hildegard with them under the category of glossolalia. For example, Talking Pentecostalism has an article The History of Tongues10 which infers through a footnote that Hildegard is an example of Pentecostal glossolalia in the 1100s. Writing for the Assemblies of God sponsored online portal, Enrichment, Tim Enloe links Hildegard to the modern Pentecostal rite but does not specify her definition.11

Pentecost academics may cry foul. The reference to this woman is very seldom in Pentecostal works, and one cannot build a popular case that represents the Pentecostal psyche. The layperson rightly may state that they are unfamiliar with this name. Yes, both rebuttals are correct, but a segment within the Pentecostal world does hold this theory, regardless of how small or great.

The Gift of Tongues Project has uncovered many theories on the doctrine of tongues that are inconsistent with history or sources. Typically, the Gift of Tongues Project analyzes and provides a digital copy of the source work to sustain conclusions. However, the German language and history are outside the abilities of the GOT Project. This impediment required a search for someone who had done the necessary work. The findings found in Hildegard of Bingen’s Uknown Language by Sarah L. Higley fulfilled this criterion. This scholar took the necessary time and labor analyzing the original and secondary texts. She went one step further and provided a critical analysis.

This scholar examined the various other manuscripts available and performed an in-depth comparative analysis.

Her book is the definitive source for Hildegard of Bingen’s use of language.

What did Higley conclude?

Dr. Higley concluded that Hildegard of Bingen invented a language. The German Abbess’ language was a creative and intellectual pursuit, not a divine or mystical intervention. She is no different from J. R. Tolkien, who produced a fictionalized Elvish language. Tolkien is an example Higley gave, among other notables who have done this throughout Western history. Higley goes on to state:

Even so, modern language inventions, especially those by women and those that exist independently from written fiction, have been subtly encumbered by the pervasive connection with the nineteenth-century medium Smith and her “somnambulism” or “dissociative identity disorder,” or the “unfeminine” acts of female charlatans such as Mary Baker and her pretended identity as “Princess Caraboo.” This connection exposes a mindset that has looked upon woman and her linguistic experiments as exotic, mysterious, transgressive, glossolalic, or childlike. It is a topic that continues to inspire curiosity and sensationalism and has minutely colored reception of Hildegard’s Lingua.12

The author spends considerable time in her book looking at the different theorists connecting glossolalia and ultimately rejects them.

Assumptions about Hildegard’s glossolalic tendencies were an early reaction to the discovery of the Lingua, but they are curiously tenacious.13

The difference between speaking in tongues and inventing a language is this: the essentially oral, performative, and spontaneous nature of glossolalia is not replicated in the written and thought-out nature of glossopoeia where meanings can be rationally applied to words and parts of words.14

Hildegard of Bingen’s Unknown Language: An Edition, Translation, and Discussion deserves more coverage than supplied. It earns the right for at least a full chapter in the Gift of Tongues Project database. Nevertheless, copyright rules do not allow for this. The reader is encouraged to purchase or loan this book for further information.

There is no doubt that Bingen’s life swirled around sound, music, and harmony. Her music, when reproduced by a modern repertoire, has the tone of divine infusion. The British Broadcasting Corporation has a short article with clips of contemporary singers performing some of Hildegard’s works. The song, O ecclesia oculi tui, especially has a heavenly/mystical feel. It sends the listener to otherworldly regions. The music easily connects with a mystic of any epoch.

Geraldine E. Henderson completed her dissertation on Hildegard and sound. A connection which she believed was an essential part of the Abbess’ identity.15 Henderson was unaware or made no connection with glossolalia. However, she believes the Lingua ignota was a secret language for her convent.

In her philosophy, virginal music is extended in language. For her convent Hildegard had developed a special vocabulary of some nine hundred words using a twenty-three-character alphabet called the Lingua ignota. A great deal has been written about the significance of the unknown “language” they spoke. What is important to this study is that Hildegard’s attention to language–the special vocabulary reserved for her nuns–is indicative of her desire to set them apart aurally as well as physically. This special “language” was an important element in their convent life.16

If this interpretation by Henderson is correct, Hildegard’s creation of the Lingua ignota does parallel the contemporary Pentecostal rite. They both signal a form of language as distinguishing the divinely inspired person from the non-inspired. It sets them apart.

The difference between the Pentecostal and Hildegard rite is the nature of the experience. The first is an improvised individual experience with no reference to structure, grammar, or meaning. The second one is a communally agreed-upon sub-language attached to their regular one.

Jennifer Bain, a historical musicologist, writing for the Journal of Music Theory, remarks that Bingen did not add anything significantly different musically during her era. Rather, she was “immersed in the musical traditions of her day.”17 She noted nothing extraordinary in that respect. Nor does she allude to glossolalia.

In this short traverse into musicology, which again the Gift of Tongues Project lacks such acuity, the consensus appears against Hildegard singing in tongues, or jubilation. A subject that requires more investigation but an initial survey does not verify.

The evidence demonstrates that Hildegard of Bingen was mystic, and sound was important in her repertoire. However, it did not extend into the realm of ecstatic sounds resembling glossolalia. Hildegard carefully constructed a sub-language, or in-house religious vernacular, for the building up her converts identity and uniqueness.