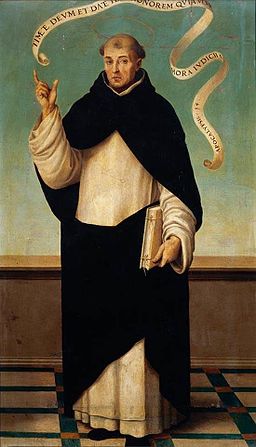 Vincent Ferrer was a Dominican missionary in the 14th century (1350 to 1419 AD). Legend has it that his native tongue was Valencian, a dialect of Catalan spoken in Spain. He didn’t know any other language. This did not stop his audience from miraculously hearing him in their language.

This is a historic variant of the miracle of speaking in tongues.

As an itinerant missionary whose travels brought him throughout western Europe, the lack of language preparation would have been a severe hindrance. To make matters worse, he knew only Valencian, which was a localized language. Very few within Europe had the ability to understand his native tongue. According to the account found in Acta Sanctorum this was overcome by the miracle of those hearing. He spoke in Valencian and the people understood his words perfectly in their own language.

Valencian was part of the Catalan group of languages distinct from Spanish, French, or German.

“Catalan is not, as some believe, a dialect of Spanish, but a language that developed independently out of the vulgar Latin spoken by the Romans who colonised the Tarragona area. It is spoken by 9 million people in Catalonia, Valencia, the Balearic Isles, Andorra and the town of Alghero in Sardinia.”1

A biographer, Ranzano, Bishop of Lucera, recounts part of Ferrer’s life in this way:

He converted a prodigious number of Jews and Mahometans, heretics and schismatics. He visited every province of Spain In this manner, except Galicia. He returned thence into France, and made some stay in Languedoc, Provence, and Dauphine. He went thence into Italy, preaching on the coasts of Genoa, in Lombardy, Piedmont, and Savoy; as he did in part of Germany, about the Upper Rhine, and through Flanders. Such was the fame of his missions that Henry IV, King of England, wrote to him in the most respectful terms, and sent his letter by a gentleman of his court, entreating him to preach also in his dominions. He accordingly sent one of his own ships to fetch him from the coast of France, and received him with the greatest honours. The saint having employed some time in giving the king wholesome advice, both for himself and his subjects, preached in the chief towns of England, Scotland, and Ireland. Returning into France, he did the same from Gascony to Picardy. Numerous wars, and the unhappy great schism in the church, had been productive of a multitude of disorders in Christendom; gross ignorance, and a shocking corruption of manners, prevailed in many places; whereby the teaching of this zealous apostle, who, like another Boanerges, preached in a voice of thunder, became not only useful but even absolutely necessary, to assist the weak and alarm the sinner. The ordinary subjects of his sermons were sin, death, God’s judgments, hell, and eternity. He delivered his discourses with so much energy that he filled the most insensible with terror.2

As per the goals of the Gift of Tongues Project, the Latin source text along with an English translation is provided below.

English Translation from the Latin Text

Many in addition were used to being astonished about the miracle by him, because a number of them who heard the very man preach, that they were frequently so many, more were forced to stand a long distance from him. Yet they distinctly heard his speech — not smaller to those who were a great distance than those who were nearby. Moreover, that speech was outstanding in all ways upon him because that which he taught was confirmed by many distinct and miraculous signs, of which things we relate below. Indeed, that it is worthy with great admiration, because the gift of languages, even as also by the former Apostles, had been granted to him. For while through those regions together, which we mentioned above that he spread his preachings, having always spoken his Valencian and had been the maternal tongue. Yet each person, both young and old ones and either sex, were comprehending his speech every single word perfectly. Just as if he was born in the country of every single one of them and had been speaking their language. Many from Greece, Germany, Sardinia, Hungary and others born in other places who did not know except their mother tongue, nor understand another, prepared to the places in which Vincent was preaching. They gathered together with others for the purpose of listening and, they confessed at the end of his words being made with them that they understood the individual words of the man of God, no less than if they had heard him speaking their own language. In that region of Gaul, which we call in our time Britain, whom the French call the British British-speakers of whom the language is understood to these only. Although very many of them know how to speak the French language, many yet do not speak except their own language, and they understand no other, who yet distinctly understood the man of God speaking his own native language, that the children and women together would have gained too the greatest fruit from his beneficial instruction.3

2 thoughts on “Vincent Ferrer and the Gift of Tongues”