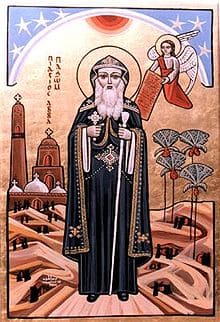 The alleged fourth century account of Pachomius speaking in tongues is an important document in the tongues debate. It distinguishes itself as one of the few, if any, personal experiences of tongues speaking within the realm of ecclesiastical literature. The many other remaining accounts are theological assertions.

Pachomius was a fourth-century Egyptian Christian who was influential in the establishment of the christian cenobite movement — a tradition that stressed communal rather than isolated personal monastic living. This system of religious living became the example for later monastic movements.

A short literary analysis demonstrates that the author(s)/editors of this work, believed this gift to be the supernatural endowment of foreign languages. There was no other allusion to anything else.

The complete English translation of this text can be found at Pachomius Receiving the Gift of Tongues in English and Greek.

There are still some questions from a technical perspective that need answers. Did Pachomius hear and speak in one sound, or many languages? Was this a temporary or permanent gift for Pachomius? What words were used in the Greek and Syriac that relate to tongues? Were these consistent with the ancient usage or are there new words added to the tongues vocabulary?

One voice, many sounds?

Or did he speak in all languages sequentially? The following text provides some clues.

He prayed for three hours, entreating God earnestly for this. Suddenly something like a letter written on a piece of papyrus was sent from heaven into his right hand. Reading it, he learned the speech of all the languages. Having sent up praise to the Father, the Son, and the Holy Spirit, he came back to that brother with great joy, and began to converse with him faultlessly in Greek and Latin.1

The answer is neither. The text indicates that he had the understanding of all languages and could choose whichever language was most convenient at that moment.

Was this a temporary or permanent endowment?

There is no explanation here on whether it was temporary or permanent. However, the authors/editors of this work wrote about Pachomius in heightened mythical proportions. They would no doubt believe that Pachomius would have the ability when required.

The Greek text contains the typical keywords in the Christian tongues doctrine, plus a new one:

The miracle of speaking in Greek and Latin

Greek was the international vernacular which was slowly being supplanted by Latin. Pachomius’ ability to speak in these two languages was symbolic. This narrative gave Pachomius and his community an international reputation and a sense of divine authority.

Dating and Insertion of the Text

There are problems tracing this narrative to Pachomius’ time. It may be a later insertion. This condition is not fatal to this study as its goal is to trace perceptions—not realities. It remains a source for reflecting attitudes on the christian doctrine of tongues during this time or slightly later.

The miraculous tongues are found in one or more ancient portraits (called hagiographies) of Pachomius outside of the Lausiac History and were inserted into the Syriac account.

The respected scholar Francisci Halkin, S. I., has the miraculous speech in his Greek source copy which is not listed as part of the Lausiac History. He published it in Sancti Pachomii Vitae Graecae.4 The text is from “XI,9 of the Biblioteca Laurentiana of Florence (Ms. F.) which was copied in 1021 in the monastery of Apiro in Southern Italy.”5 A digitization of the Greek is provided at Pachomius Receiving the Gift of Tongues in English and Greek for your convenience.

Armand Veilleux, who calls himself a Monk at Mistassini, performed a large and extensive translation on all the materials relating to Pachomius. He used Halkin’s Greek text as the basis for translation. He included the miraculous speech as paralipomena –supplementary or extra works. He did not list it as part the Palladius’ history either.6

When looks for this reference in other Greek or Latin texts, it becomes more difficult. The sources for Palladius’ Lausiac History are a challenge to find or access. The following demonstrates a partially studied result. They do point to the fact that the Pachomius tongues was not in the original Lausiac History.

A Greek text published by Johannes Meursius in 1616 is considered one of the best manuscripts on the subject. It has several copies available, but the only listing found in Arundel 519 at the British Museum. Unfortunately, I do not have access to it and cannot make any comment.

The early Latin translator and historian, Rufinus’ Historia Monachorum Seu Liber De Vitis Patrum7 does not have this account. His account is similar to Palladius’ and there has been some back and forth. Whether he took from Palladius, or Palladius from him, or that they both drew from an earlier source.

Neither is it found in two other Latin versions.8

A Latin translation offered by Gentiano Herveto (published in 1624) along with a parallel Greek text does not contain it.9

This discussion inevitably brings one to Dom Cuthbert Butler. Although his work, The Lausaic History of Palladius: A Critical Discussion together with Notes on Early Egyptian Monachism is over 100 years old, his findings still resound on the subject today. He states that the parallel Greek of Gentiano Herveto is from the publication of Fronto Ducaeus (Du Due) in 1624, who, in turn, used an earlier Greek source. Unfortunately, the actual source name is not apparent. Butler did not have a high concept of Ducaeus’ Greek version either. He thought it was a patched-up version consolidated from other copies.10

The Syriac text was provided under the guidance of Anan-Isho in the sixth century and contained this narrative. Butler asserts that Isho did not create any additions but integrated other earlier texts or hagiographa into the account.11

The recension of Anan-Isho is found in “The Book of Paradise: Being the Histories and Sayings of the Monks and Ascetics of the Egyptian Desert,” published and translated by E.A. Wallis Budge. Budge did not describe the manuscript’s name or provide details. He explained that he was shown a Syriac text by the Vicar of the Chaldean Patriarch, which, for political and religious reasons, could not be purchased or borrowed. He secured to have the text hand copied. The hand-copied edition is dated around 1890, while the original is estimated to be twelfth to the fourteenth century.12 One suggestion has it as Moṣul MS 9513 There are other editions available, such as:

One manuscript on the subject is dated to 534 AD. This early document has not been reviewed for this article. It is unknown if the tongues sequence exists in it.

In fact, E. Wallis Budge attributes this specific text among others as non-Palladius works. He attributes them to “those of Mark, Eulogius, Adolius, Moses the Indian, Pior, Moses the Libyan, Evagrius, and the Brother who lived with him.”15

Budge’s Syriac version: Pachomius Receiving the Gift of Tongues in English and Syriac
contains the Pachomian tongues, is posted for your convenience.

In conclusion, it is uncertain whether the narrative of Pachomius speaking in tongues was in the original Palladius work. The assumption is it probably did not. However, it did exist shortly after the life of Pachomius. One can faithfully assert from the Syriac manuscript that there was a sixth-century or earlier perception that speaking in tongues within Egyptian and Syrian Christianity was the miraculous speaking of one or more foreign languages. Perhaps, this idea was localized and not universal.

3 thoughts on “Pachomius on Speaking in Tongues”