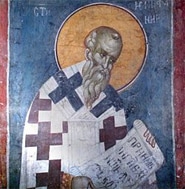 The Epiphanius text on the mystery tongues of Corinth. One of the most important works for unlocking the riddle.

This fourth-century or so text gives new light on an old question. Epiphanius’ answer is found in the ancient Jewish liturgy of speaking and interpreting.

The following is an analysis of the text.

The Epiphanius text on the Corinthian Conflict

Here is the central part of the text found in Epiphanius’ Panarion Book I, Section III, Heresy 42 starting at Scholion XIII and XXI:

. . . Therefore languages are from a grace of the Spirit. Of what kind does the Apostle speak? He knew how not only the different Hebrew sounds, and manifold expressions in every single word with skills adorned with eloquence, but also the proud language of the Greeks; some who boast the ability to speak Attic, Aeolic, and being able to utter the language of the Dorics, of whom had caused the disturbances, and factions within the Corinthians, to which the Epistle was dispatched. . . . And he confessed the gift which is having the ability to proclaim [the oracles] with the Hebrew words and also teaching the Law to be a spiritual endowment. And he agreed that it is a spiritual grace to proclaim and to teach the Law in the Hebrew words.1

The Meaning of the Text

The Epiphanius text states two things about the Corinthian conflict: it was a clash between different Greek ethnic groups and the Hebrew language had some role in the Corinthian assembly. There was no reference to an out-of-this-world mystical experience, or something supernatural.

Hebrew, Greek, teaching the Law — these indicators combined suggest it to be a liturgical or didactic problem within the Corinthian gathering. These factors necessitate the need to find more information on early Church liturgy.

The answer to the Corinthian tongues conflict may be found in understanding the contemporary Jewish structure during that time and how much the early Christian Church in Corinth adopted this custom. There are two ways to understand the background to this Epiphanius passage from the historical records:

The second option may be a more acceptable interpretation.

The Epiphanius account is a base element for a series of articles called The Tongues of Corinth to prove or disprove the above theories. The goal of this series is to trace the role of the reader, speaker, and interpreter starting from the rites found in the Jewish diaspora, specifically Corinth, to its transition into Church office, if there is such a relationship, and mapping this evolving rite until the thirteenth century.

The text itself is one of the clearest and logical found so far written by a Church Father. However, this work, along with Jewish writings on public reading, are four centuries removed from the actual Corinthian tongues saga. It could be a later interpretation.

The Absence of this Document in the Tongues Debate

It is a mystery why this passage has never come up in any critical discussions on the problems tongues of Corinth. Frank Williams’ work, The Panarion of Epiphanius of Salamis, Book 1 (Nag Hammadi Studies, 35)2 contains an already available English translation, though he, nor anyone else makes no correlation to I Corinthians in the translation of the text found at the header scholion 13 and 21.

The only critical look into the position of Epiphanius on the gift of tongues is the The New Schaff-Herzog Encyclopedia of Religious Knowledge. Unfortunately, the contributor, PKE Feine, totally ignores this passage and utilizes a completely different but much weaker citation made from the Panarion XLVIII:4 to make his case about tongues. The citation and commentary lead the person to believe that Epiphanius wrote it to be an ecstatic utterance relative to the Montanist movement.3 The Montanist connection is a necessary one for those scholars who hold speaking in tongues as glossolalia. This omission is a major oversight by Mr. Feine.

The motivation for Epiphanius to Write this Text

Epiphanius was attacking a person named Marcion for allegedly altering the text in I Corinthians 14:19 to suit his own needs. It is known that Marcion was the son of a Bishop, and perhaps was a Bishop himself, but at some point, there was a clear break between himself and the institutional Church.

A translation Problem with the Key Text

The Epiphanius author(s) defined Marcion a heretic because Marcion had revised the I Corinthians 14:19 text. There is some confusion as to how Marcion revised it. Two alternative Greek texts give slightly different nuances:

Marcion mistakenly added: “according to the Law,” with, “But I wish to speak five words in the Church with my mind”.4

This would render I Corinthians 14:19 to read, “But I wish to speak five words in the Church with my mind according to the Law.”

This version fits nicely in with Epiphanius’ argument that Marcion is adding to the Bible and creating a heretical version. The Epiphanius text shortly afterward uses this as a springboard to call Marcion many harsh names.

Whereas an alternative Greek text has:

Marcion mistakes:“But I wish to speak five words in the Church with my mind”, on the other hand differently “according to the Law.”5

This alternative text would render I Corinthians 14:19 to alternatively be read as, “But I wish to speak five words in the Church according to the Law.”

The fourth century and later Ambrosiaster text would agree more with the second argument:

“But in the Church,” it is said, “I wish to speak five words according to the Law that I may also build up others than ten thousand words in a tongue.”6

The Ambrosiaster text demonstrates that there was a tradition connecting I Corinthians 14:19 with the Jewish Law. How widespread this tradition was throughout Christendom in the early centuries is not known.

There is a third potential contributor to this rendering. Perhaps it is remote at best, but requires an investigation. The similarity in the Greek between the word mind — νόος and Law — νόμος. They are very close in spelling, with only a one letter difference. It could potentially be easy for a manuscript writer to confuse these and cause a transmission error. This error may be a remote cause because the Greek grammar in this situation has them distinguished by case. Mind is in the dative case – νοΐ and Law is in the accusative — νὸμον. It would be hard to get them mixed up. However, it is not outside the realm of possibility.7

The writer(s) went on a tirade against Marcion and slandered him with homophobic references against having made such a change. However, the author(s) failed to realize that this change is not unique to Marcion and was present in some legitimate Christian communities as noted in the Ambrosiaster text above.

Questions About Authorship and Dating

There is a disclaimer about the authorship and date–two factors that do not change the outcome. The work is customarily credited to Epiphanius, Bishop of Salamis, in the fourth century. This text may have been heavily edited, redacted, and even added over the centuries since its original release. We are not sure whether it is a fourth-, fifth- or sixth-century opinion. Even with this problem of textual criticism and dating, the work still reflects an ancient one.

However, the nature of Epiphanius assertion that there was a direct Jewish correlation to the problem tongues of Corinth suggests that this was part of the original text. Later editors or writers would not have added such a connection.

The complete English copy can be found at: The Epiphanius Text on the Tongues of Corinth in English, translated by me, or the official translation completed by Frank Williams.

For the complete set of articles:

2 thoughts on “Epiphanius on the Problem Tongues of Corinth”