Who would have thought that a relatively unknown eleventh century Greek Christian statesman/philosopher/theologian by the name of Michael Psellos would provide such important clues behind the mysterious christian doctrine of tongues? 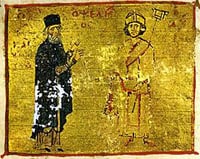 It was never a mystery to Psellos. It’s just that western history has largely forgotten about this brilliant thinker. If he was popular, the present issues and debates surrounding this mysterious doctrine would not be so fashionable.
Or it just may be that Psellos was forgotten because of the complexity of thoughts that he expressed. His approach to faith, scripture and intellect took western society five hundred or so more years to catch-up. It is surprising that his complex weave of Greek philosophy and Christian faith in a very conservative Christian environment didn’t get him into more serious trouble than he encountered.
But then, he did get himself in trouble. He thought highly of opinions and liked to show-off his intellectual genius. After reading his text, it is not clear whether he was trying to solve the riddle of Nazianzus’ miracle of hearing or speech, or it was an opportunity to show his intellectual mastery. Regardless of his motives, he leaves us with the richest wealth of historic literature on speaking in tongues.
Who exactly was Michael Psellos? Any biography in English on him is very limited. The Catholic New Advent website has a general outline of him. He was a:

“Byzantine statesman, scholar, and author, born apparently at Constantinople, 1018; died probably 1078. . . his many-sided literary work and the elegance of his style give him a chief place among contemporary scholars.”

The New Advent article proceeds to explain that he lived both in and around Constantinople (today known as Istanbul) and was politically involved with various leaders. He worked his way up to being the Secretary of State. He was a Christian who had a love-hate relationship with the Church. One of the lower moments in that relationship was his stance on choosing Plato over Aristotle. The Church tolerated the non-Christian writings of Aristotle, but frowned on Plato. He studied theology but loved philosophy, and this was a continued source of contention.
There is also a Wikipedia biography. This one is the most popular and is copied throughout the web in various forms, though this work has been flagged by Wikipedia for need of revisions.
Michael Psellos is a between-man. He lived in the eleventh-century and still was connected to the ancient traditions of the church, but also at the beginning shift of intellectual and scholarly thought that modern readers come to rely on. He bridged both worlds. This is why his work is so important.
He wrote in Greek and appealed to the Eastern Greek world. It could be that his choice of writing in Greek during the time when Latin literature had far more prominence diminished his universal appeal.
Psellos reinforces one of the main arguments of the Gift of Tongues Project that coverage of ecclesiastical literature has been woefully neglected on the subject. This is partially due to the fact that most libraries do not have ancient Christian texts in the original languages, and so few ancient Church texts have been translated into English. It makes the Church fathers appear silent on the subject to western readers. This has led to a variety of erroneous conclusions. Psellos and many other ancient Church writers demonstrate this neglect is seriously wrong, and a fresh look at the Christian doctrine of tongues without modern prejudices is required.
What did Psellos write that was so important? Two things. He first clears up the Nazianzus paradox of whether the miracle of tongues was in the speaking or hearing. Secondly, he particularly clarifies the similarities and differences between the ancient Greek prophetesses going into a frenzy and spontaneously speaking in foreign languages they did not know beforehand, and with the disciples of Christ who also spontaneously spoke in foreign languages.
What did he exactly say and write on this? The English translation can be found here: Psellos on the Tongues of Pentecost. It was quite a difficult translation challenge, be sure to read the Technical Notes. There is also a brief commentary and here is the original Greek text.
It is an important work that changes the nature of the discussion. Many thanks to Alex Poulos who did some fine research and unearthed such a gem. He translated one paragraph of the text along with some comments. It is found over at his blog, Michael Psellos on Pentecost Part 1.
It is exciting to uncover such a rich treasure on this subject and share it with all interested readers on the subject. Not only will a number of articles be generated directly but a few older articles, especially the ones covering the history of glossolalia from the eighteenth century onwards, will be updated because of these findings. ￭