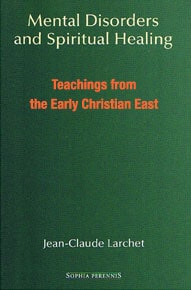 Mental Disorders and Spiritual Healing: Teachings from the Early Christian East by Jean-Claude Larchet is an examination of mental illness from an Eastern Christian perspective.

It is very well done work on the topic at hand, but it is not intended to prescribe therapeutic solutions for those who are suffering, or dealing with a person struggling with some form of mental illness. One has to read it for the historical value. It is a detailed history on the perceptions and practices by various Eastern Church leaders on the subject.

The author’s knowledge of both modern psychological conventions and Eastern Church practices regarding this subject is finely interwoven. There is some very well documented work here.

It is partly an apologetic of the Eastern Church writers in light of modern psychiatry. Larchet strives to promote that these Church leaders were very thoughtful and insightful in relation to those who had mental illness. He clearly demonstrates that these leaders were not foolish and neither quick to attach a demonic definition to everyone who had mental health issues.

He does go into significant detail showing that many of the Eastern Church leaders discerned that it was a multifaceted problem — a physical disease or injury, a persons temperament, demonic influences, and a number of other variables could be valid sources of a persons mental suffering. Some of the solutions to this problem were a patient long-time intervention, one-on-one intense relationships, a specialized prayer, holy oil, singing or reciting scripture, seclusion, fasting, and encouraging sufferers to participate in their own healing as much as possible. Larchet does not demonstrate any serious negative viewpoints on the treatment offered by these Eastern Church leaders.

It outlines a general idea on how to deal with mental illness within a Christian context, but fails to build a clear doctrine. A large number of Church leaders are introduced on the subject but there is no perceivable pattern or evolution of thought around this issue.

This book hardly addresses the theological basis of mental illness and spirituality. It assumes that readers know what demons are, and that they do exist. He hardly addresses these axioms. Neither does it address the question of why there was so much emphasis on expelling demons in Jesus’ ministry while other Jewish literature was less inclined to do the same during this period. Nor did he express what the influences were that led to the informal structure Eastern Christians used in response to this malady.

Jennifer Doane Upton would disagree with the assessment of this book so far, she takes an altogether different perspective in her book review found at the publisher’s website, Sophia Perennis:

Mental Disorders and Spiritual Healing presents the viewpoint on mental disorders held by the early Church Fathers, and in so doing provides a fresh “new” look at psychotherapy, as seen from the standpoint of a tradition which knows the human being as composed of body, soul and Spirit, and gives precedence to the Spirit. The author, Jean-Claude Larchet, is a practicing psychiatrist as well as an Eastern Orthodox Christian.

One wonders if he is choosing the best writers on the subject and ignoring the poorer ones, such as the writings of Pachomius, who believed that anyone who has a demon had a sign of a physical entry point. It was Pachomius duty to find the entry point and expel the demon, whether it was in the finger, foot or whatever. Although the many writers he lists are prominent, one questions whether their opinion was the popular one, or did the masses follow something similar to Pachomius.

This is definitely not a how-to guide on distinguishing between mental illness and demonism. If anything Larchet promotes that the eastern fathers treated whatever state the person was in with respect, though some of their practices seem barbaric to our standards — like placing a violent-to-self or -other type person in a secured sack until the anger abates.

The real strength of this book is in two observations. The first one is the Eastern Church perception of a psychological condition they called acedia — a type of sadness equivalent to what we call depression. The book itself does not make this correlation but it seems close. It goes on to list various remedies that do not deal with the sadness directly but with addressing or limiting the various expressions of sadness to cure it. It also demonstrates that ancient authors have identified a human condition whose appearance has not changed even to this day.

The second is found in the last chapter, entitled, A Most Singular Kind of Folly: The Fool For Christ. It has little to do with defining mental disorders at all, but is about a stratum of Christians who purposely pretended to be mentally ill for various reasons; whether for attaining humility through abuse or rejection, or it was a representation for detachment from this world, or it was for charity purposes. For if one feigned madness, this gave entrance to world of the low and downtrodden. This association became a source of ministry.

It is not a difficult book to read. The author does use some technical vocabulary but never quotes esoteric texts in the original Greek or Latin to prove his point. Everything can be understood by the English reader.

The whole subject of the relationship between mental illness and spiritual influences is severely under-represented in Christian literature, The author is one of the few, and maybe the only one, that has attempted such a rigorous examination. It is a good start. Hopefully more researchers will use this to build a more complete framework.

Mental Disorders and Spiritual Healing: Teachings from the Early Christian East by Jean-Claude Larchet, Translated by Rama P. Coomaraswamy and G. John Champoux, can be found at Amazon. It is only available in print format.

See also the previous article on this subject A Religious Look at Miracles and Mental Illness.