An infographic that outlines the history of Pentecost from inception until today.

The graphic contains the significant four streams of thought throughout the centuries: The Catholic, Traditional Protestant, Conservative Protestant, and the Glossolalia Stories.

There is a dominant assumption that speaking in tongues died out in the early church and then reappeared with the Pentecostal awakening in the late 1800s/early 1900s. Not true. Almost every generation has wanted to claim Pentecost for themselves throughout history.

See the following paths of tongues through the centuries for details. 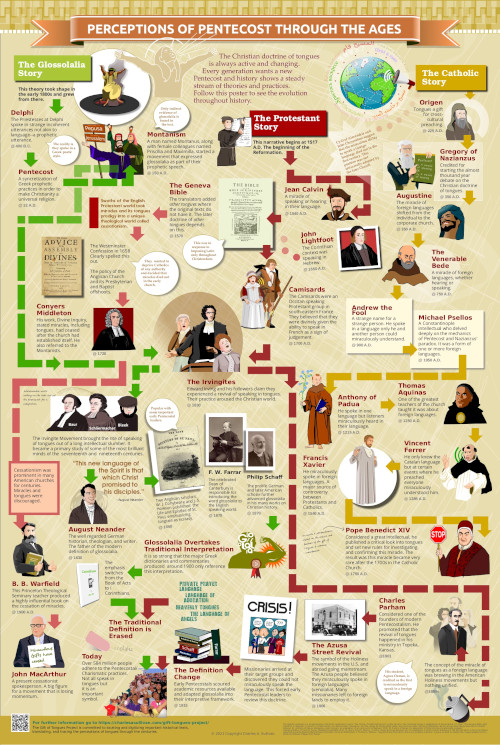 There are three surprises for many looking at this graphic. First of all, Pentecostal tongues as a non-human language is a theological distinction that is only 100 years old. Non-human, angelic, or prayer language is a changeover from the missionary tongues failure in early Pentecostalism. The early leaders borrowed the redefinition from the glossolalia movement.

Secondly, Catholic movements and persons have tried to re-create Pentecost on numerous occasions throughout the centuries. There is a woeful lack of coverage of these events that has led to many erroneous conclusions.

Thirdly, the doctrine of glossolalia, or in long-form, those in a state of ecstasy who utter primitive sounds and utterances, began to take shape only in the mid to late 1800s. It is by no means an old doctrine at all.

One learns as well that there are varying definitions and interpretations of this practice throughout the centuries.

This is a small sampler. The text is a little blurry. A full-size printable version is available for subscribers and for personal use only.

There are only a few references on Corinthian tongues in this infographic. For more detailed information on the Corinthian account see, The Tongues of Corinth.

The chart follows perceptions. Perceptions are not necessarily confirmed or historical facts. Whether these accounts are true is up to each person to decide.

Of course, substantiation is necessary. One can find the data behind the graphics, whether in the original language, a translation, or commentary, at the Gift of Tongues Project.

There are minor movements and people that are not included due to space reasons. Again, see the Gift of Tongues Project for more information.

There are other infographics that cover sub-topics such as A Catholic history of Tongues; A History of Unknown Tongues in the English Bible; Cessation, Miracles and Tongues; and The Tongues of Corinth.