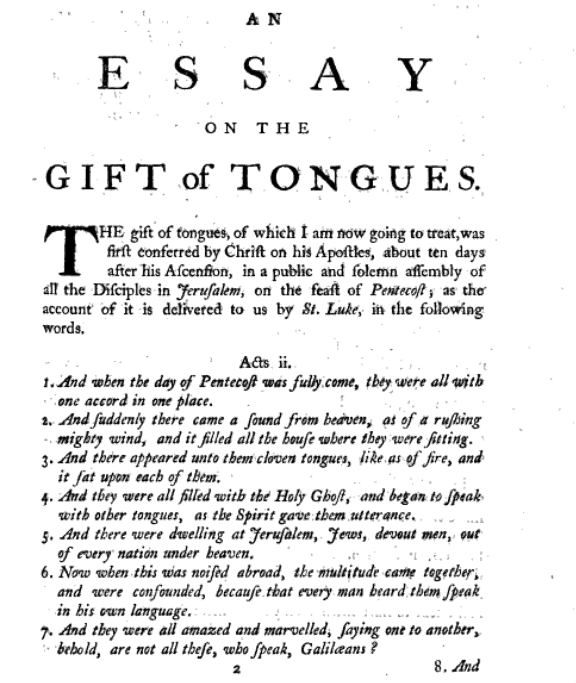 Conyers Middleton’s Essay on the Gift of Tongues is an important later Reformation work on this subject. He dug deeper than most authors but did not reach paydirt. Nonetheless, there is good thinking going on here.

Conyers Middleton, a controversial church historian from the 18th century, became famous for his work Divine Inquiry but also wrote a small treatise dedicated to the topic on the Gift of Tongues.

It is an essay found in The Miscellaneous Works of the Late Reverend and Learned Conyers Middleton Vol. II, published in 1752, Pg. 79, properly entitled, An Essay on the Gift of Tongues.

It is one of the better works on the topic. He surpasses the level of arguments written by George H. Williams and Edith Waldvogel, A History of Speaking in Tongues and Related Gifts, published in Michael Hamilton’s 1975 work, The Charismatic Movement, which is ubiquitous in charismatic and pentecostal circles, or John MacArthur’s 1993 cessationist publication, Charismatic Chaos. (I haven’t read MacArthur’s new work, Strange Fire, to comment on it.)

Middleton quotes a larger than the usual number of Church Fathers when he covers the tongues of Pentecost. He painted a portrait that it was the spontaneous speaking in a foreign language that the speaker previously did not know. He was not aware of any doctrine of a private prayer or heavenly language.

He makes the mistake of lumping both the tongues of Pentecost and the problem tongues of Corinth as the same entity, which is very problematic. He certainly leans upon Greek and Latin authors and excludes almost completely Hebrew and Jewish sources. By doing so, he is working with a restricted set of tools.

His citing of Church literature is more extensive than most, but still falls considerably short. He does not grapple with the difficult texts offered by Gregory Nazianzus, which set the pace and discussion on the subject for centuries, nor of Augustine, who may have been the most prolific writer on tongues, which is a great oversight.

There is no attempt to perform any textual criticism in the works that he cited. He does briefly delve into the Delphic oracles, explaining that others were accusing Christians of a similar nature, but does not syncretize these two camps.