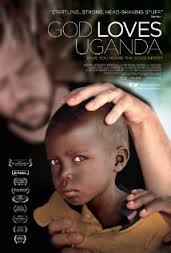 This documentary film by the acclaimed director Roger Ross Williams is a story about the complex mix of homosexuality, faith and politics in Uganda. He sees it as religious fanaticism stoking the flames of hatred and forcefully blames the influence of American evangelicals as the root cause of Ugandan homophobia.

His documentary thesis is supported by filming a devoted group of followers, and highlighting one of their former leaders, Lou Engle, from the International House of Prayer — an unaffiliated charismatic community located in Kansas City.

John Stackhouse, who holds the Sangwoo Youtong Chee Chair of Theology and Culture at Regent College in Vancouver, B.C., reviewed the film for Christianity Today and wrote:

Some people, alas, will be tempted to channel their outrage into hating evangelicals right here at home, those frightening people who are trying to wreck Africa and who, if they only could, would criminalize homosexuality here, too, and even kill unrepentant homosexuals. Such seems to be the unsubtle subtext of the film. More moderate evangelicals need to say, and say clearly, that to identify Scott Lively or Lou Engle as a typical American evangelical is like suggesting that Osama bin Laden was a typical Muslim or, closer to home, like suggesting that all homosexuals are like the most outlandish figures in Gay Pride Parades. We must speak up in public and both denounce and distance ourselves from such extremists, rather than muzzle ourselves in misguided charity for errant brothers and sisters, or we will see the gospel increasingly attacked as homophobic in just the way these people are.

…Yes, homophobia is bad. But so is evangelophobia. And what might have seemed just a decade ago to be a ridiculous and paranoid parallel doesn’t seem so now.

Stackhouse’s claim of evangelophobia has generated considerable buzz and I think he is right in this assessment.

The documentary succeeds at evoking immediate anger against evangelical christians and reinforces the stereotype of them being weird, racist, white bigots who are attempting to force their brand of truth throughout the world regardless of any human consequence.

It thrives by sweeping all evangelical christians under the same category of having a homophobic agenda. In reality, the evangelical movement is split over the topic of faith and homosexuality. This movie in no way represents this spectrum and neither is there any attempt to demonstrate that the International House of Prayer is considered a sect outside of mainstream evangelicalism. Williams selected it because it fit his premise.

It is a movie not only about Uganda, faith and homosexuality, it is also a journey for Williams to make sense of himself as a gay person who grew up in an American religious home. This should have been stated somewhere in the movie about why he was personally motivated to cover such a topic. It would give the viewer important context.

The film touches on an important subject that is becoming a genre. It is that of charismatic extremism. This can also be found in the controversial movies Machine Gun Preacher, and the The Jesus Camp where they are about independent and pioneer charismatic leaders doing their own thing with little training or external accountability. Williams has grouped IHOP as evangelical and pentecostal while it is actually charismatic – an important nuance neglected in his coverage.

Charismatic churches are hard to define and has been a subject of debate for over a decade. They are typically independent bodies that have split from a mainstream denominational evangelical church over the doctrines relating to the christian mystical experience. Many of these churches have little or no external accountability, tend to rely more on personal revelation and divine encounters which do not necessarily have to be rational. This movement is much smaller than its pentecostal counterpart, but it is highly emotive and vocal This form of mystic extremism can be very damaging for the christian movement as a whole and has to be urgently called into account.

IHOP and its brand of faith do not represent any pentecostal organized constituency which has a much larger member base. Neither am I aware of any mainline pentecostal North American organization promoting a homophobic agenda. If that was the case, then Williams would have filmed a historical masterpiece of immense value.

The film also fails to take into account that homophobia is a part of the Ugandan and African social tapestry. Same-sex relations are illegal in 36 of Africa’s 55 countries, according to Amnesty International, and punishable by death in some states. according a Guardian.com article written by David Smith. This is a huge oversight by the Film and seriously erodes the argument of American evangelical influence interfering with Ugandan politics and being responsible for increasing homophobia in Uganda.

God Loves Uganda starts with an important survey of homophobia in Uganda but denigrates into a poor stereotype of Christians. He took the easy-way-out on a very difficult topic and oversimplified the causes. Because of this, I would rank this movie a 4 out of 10.